Are you up to date on 2018 EU feed legislation changes?

As you may already know, the European Commission (EC), European Food Safety Authority (EFSA) & the European Union Reference Laboratories (EURL) play a very important role in feed applications & authorisations. These European entities are constantly updating their legislation & guidance in order to protect the safety of the food-chain from farm-to-fork. Pen & Tec has put together a short resume for you.

Did you know that the main feed additive regulation Reg (EC) No. 1831/2003 is under re-evaluation? Commission adoption is planned for 2019 & the public consultation will remain open until 3rd April 2019. Everyone is invited to leave their opinion on the website, so if you want to have your own say, click here.

In addition to public consultation, we expect that the most recent EFSA Scientific guidance will somehow introduce changes to the “new” version of Reg (EC) No. 1831/2003. An example of this is Directive (EC) No 2001/18, which was amended last year by Directive (EU) No 2018/350 in order to be in accordance with EFSA’s “Guidance on the environmental risk assessment of genetically modified plants” (2010).

Furthermore, different modifications in the European Union Register of Feed Additives have been subject to debate during Animal Nutrition Standing Committee on Plants Animals, Food and Feed (SCoPAFF) meetings, & during 2018, we saw several feed additive authorisation withdrawals including formaldehyde, Salinomycin sodium 120 g/kg (Huvepharma), & riboflavin vitamin B2 (80%) produced by Bacillus subtilisKCCM-10445. The withdrawal of vitamin B2 comes from EFSA Safety conclusions, which states that the presence of genetically modified DNA & viable cells were found in different product batches by the German official control laboratory. These genetic modifications were of concern because of the presence of a relevant gene coding for resistance to antimicrobials of human & veterinary importance.

If you are worried about the regulatory status of your product, check the latest version of Annex I & Annex II of the European Union Register of Feed Additives. Appendix 3e (in Annex I) will explain the main additive changes in detail.

If you have concerns about the list of intended uses of animal feedingstuffs for particular nutritional purposes, a new draft regulation repealing Directive 2008/38/EC has been under discussion at the latest SCoPAFF meetings. The existing intended uses with vague descriptions of nutritional characteristics which are not defended by a revision application will be deleted with a phase out period to allow interested parties to present a new application.

Another notable document which is soon to be published by the Commission is the “Guidance document on the implementation of certain provisions of Regulation (EC) No 183/2005 on the hygiene of feedstuffs”. This document has been discussed at various SCoPAFF meetings during 2018. The introduction of this regulation will certainly offer a more approachable & comprehensive view for the demanding feed hygiene regulation.

Other relevant documents published by the EC may include the consolidated version of the Regulation (EC) No 396/2005 related to Maximum Residue Levels (which was also recently amended in 2019) & the Commission Notice (C) No. 2018/2035 “Guidelines for the feed use of food no longer intended for human consumption”. The objective of these guidelines is to ease “feed use” for feed that comes from certain foods which are not going to be used for human consumption, whether they contain products of animal origin or not (Figure 1). 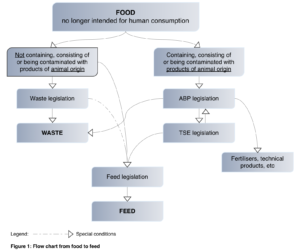 And for the record, a new European entity, “European Union Reference Centre for Animal Welfare” was created by the EC (Commission Implementing Regulation (EU) 2018/329). This institution is formed by the consortium of the Wageningen Livestock Research (the Netherlands), the Friedrich Loeffler Institute (Germany) & the Department of Animal Science at Aarhus University (Denmark). The entity will focus on pig welfare, providing technical support & assistance to EU countries. This may lead to changes in the way in which we execute animal studies in the future.

EFSA supports feed additive authorisations by providing scientific advice & guidance to applicants. During 2018, EFSA rolled out many new guidance documents. The current & previous guidance list can be consulted here. The number of guidance documents has been greatly reduced & consolidated, & the new guidance documents replace the individual guidance which were available for each additive category. There are now 7 key guidance documents that applicants should follow. Moreover, both new efficacy & target animal safety guidance allow the extrapolation of data to physiologically similar target species, which is a great advantage for feed companies. You can read more about it here.

Apart from the recently implemented guidance, EFSA has also launched two draft guidance for Public Consultation regarding feed additive applications; “Administrative guidance on the preparation and presentation of applications for authorisation of additives for use in animal nutrition” & “Guidance on the assessment of the safety of feed additives for the environment”. In addition, two draft guidance related to nanoscience & nanomaterials in the food & feed chain have also been published for consultation. With Part 2 not due to be finished until mid-2019, the Part 1 resume of the document is already available to the public. On 1st April, a stakeholder workshop related to the guidance will take place in Parma, Italy. If you would like to participate, please see more information here.

Another change in 2018 with regards to EFSA relates to the Qualified Presumption of Safety (QPS) list for microorganisms. The QPS list is continuously revised & updated by EFSA, with the latest version being published in July 2018. The updated version brought 46 new notifications (34 for feed additives), you can find the most significant modifications here.

And speaking about the EURL… let’s move onto their updates.

Despite no major changes, the EURL guidance for applicants & other relevant documents such as the Declaration Form (DF) & the Sample Validity Check List have been updated. The EURL kindly advises that applicants & the public should use the latest version of this DF. We recommend you take a look at this link.

Also, Annex VII of the Regulation (EC) No. 882/2004 was amended twice in 2018 & these amendments provide new & different reference laboratories. If you are interested, you can read the new consolidated version here.

Do you need assistance on further legislation changes?

Please do not hesitate to get in touch with us if you require any assistance as we would be happy to help!