Dr Hannah Lester was invited to moderate the Panel Discussion on “Sharing Experiences of Regulatory Processes and Policies” at the Feed Additives 2017 conference, with a focus on how applicants can work smarter and be more efficient during the EU registration processes. 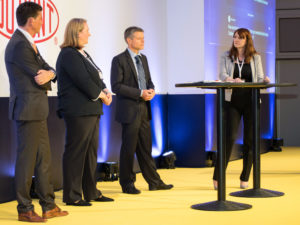 Hannah also asked the panel for their top tips for a successful feed additive registration:

Several questions were asked by audience members, which the panel did not have time to answer. Pen & Tec’s regulatory team have addressed the following questions raised during the panel discussion:

Pen & Tec: This is covered in the feed regulation, Regulation (EC) Nº 767/2009. Feed materials that are not listed in the Catalogue of Feed Materials can be listed in the Feed Materials Register. The Catalogue of Feed Materials is updated periodically, most recently as Commission Regulation (EU) 2017/1017. Amendments may be proposed by appropriate representatives of the EU feed business sector such as FEFANA, FEFAC or other industry organizations, as well as by Member State competent authorities. Amendments are debated and adopted by the EU Commission and Member State delegates in SCOPAFF Comitology (Standing Committee on Plants, Animals, Food and Feed, Animal Nutrition Section), resulting in the updated regulations mentioned above.

Q: In your experience, do EFSA give genuinely useful pre- or post-submission meetings?

Pen & Tec: Due to resource limitations, EFSA do not provide the opportunity for official, detailed pre-submission discussions. However, EFSA offer a web-based Help Desk service and EFSA Scientific Officers often give informal, non-binding advice by e-mail or telephone. EFSA also offers minuted teleconferences to applicants at critical stages of dossier review, post-submission. Currently, such post-submission dialogue with EFSA is limited and only allowed at specific time points, e.g. to request clarification after a clock-stop or after the adoption of an opinion. This can be useful if you ask the right questions!

Pen & Tec: Phytogenic feed additives (phytobiotics or botanicals) are a hot topic at the moment, due to discussions about their mode/s of action, and naturally-present substance/s of potential toxicological concern, also present in many common foods, herbs and spices. The Commission is still considering a large number of botanically-derived flavouring compounds and currently there is an effort to draft a guideline to distinguish between plant-based feed materials and feed additives. There are also reports that a new ‘phytogenic’ group will appear as a spin-off from the flavours consortium, which may consider the functionality of plant extracts separately and may lead to a new functional group…..We will have to wait and see!

Q: Given the time needed to perform studies, it sounds impossible to keep up with EFSA guidance evolution on a given dossier. Thoughts?

Pen & Tec: We recognize that it is difficult to keep up with EFSA, especially for applicants with relatively few dossiers underway, or small regulatory teams. Several new EFSA guidance documents were adopted at the EFSA FEEDAP plenary meeting on 27 September 2017. These were published on 17 October 2017. During that FEEDAP meeting, which Pen & Tec attended as observers, EFSA encouraged applicants to start following the new guidelines as soon as possible, even though transition periods are foreseen – typically 6 months. We believe that EFSA will be flexible for some time, provided that the applicant supplies appropriate justifications for any deviation from EFSA guidance. Some indications of EFSA flexibility can be found in the outcome of EFSA’s public consultation, also published.

Q: Is it time to shake up structure of EFSA expert panels?  Hire professional EFSA scientists to review – leading to consistency of reviews?

Pen & Tec: This is an interesting idea! EFSA have tried to expand the pool of experts and have limited the duration of service of experts on a given EFSA Panel, presumably to avoid negative effects, such as “group think”. On the other hand, the current practice of refreshing EFSA panels every three years, when 7 of 21 experts on each Panel are replaced, leads to major questions from new experts, which is unfair for applicants and dossiers that had passed initial EFSA assessment, pending minor questions. In our opinion, EFSA is unlikely to welcome the abolition of the independent experts on EFSA Panels, and EU Member States seem to prefer an independent EFSA that takes responsibility for food chain safety evaluations and opinions.

However, a major problem has been that EFSA’s conflict of interest policy prevents the best experts working in those areas of expertise, since in the modern world, most experts acquire their skill set largely through working on industry-funded research projects. We believe that, whereas it is of utmost importance that EFSA assessments are objective and based on good science, a balance must be found to allow industry-acquired expertise to contribute to EFSA’s work.

Q: If I have a useful and safe product that I propose to EFSA as an additive, but the dossier is not recognised, what then is the status? Is it a feed material?

Pen & Tec: The definition of a feed material is different to that of a feed additive. Bear in mind that the product cannot be a feed additive and a feed material at the same time, and that veterinary legislation takes precedence over feed legislation. The EU Commission legal services and Comitology are involved in deciding whether a dossier is within the scope of the feed additive regulation. Poorly-written dossiers submitted by inexperienced applicants often encounter avoidable difficulties by presenting the product as “veterinary” in nature. Hence, Pen & Tec recommends applicants to take “expert advice” early in the project, and if consulting the EU Commission on the legal category, present appropriate supporting arguments for your case.