Despite the word probiotic being strongly associated with beneficial effects in the gut, the scientific community is still investigating if the changes in the intestinal microbial population can affect other physiological processes. Over the past decades, the scientific community has been exploring the role of probiotics and their effect in psychiatric illness and other diseases with an important neurological factor, such as Crohn’s disease. It has been hypothesised that intestinal bacteria can produce substances exerting beneficial effects on the nervous system through the brain-gut axis, the communication link between the enteric or intestinal nervous system and the brain or central nervous system. In 2013, Dinan et al. (2013) named these bacteria as psychobiotics.

Could psychobiotics make their way to market? A legal perspective

Based on the commonly accepted effects of psychobiotics, these compounds could be marketed as neuromodulators under Article 13(1)(b) to Regulation (EC) No 1924/2008 because they could be considered as exerting “psychological and behavioural functions”. Any petition under that article should be “based on generally accepted scientific data”. Currently, there is no scientific consensus on either the mechanism or effect of psychobiotics. In addition, some studies show opposite or contradictory results. The main issue for their use in food is being able to demonstrate a clear cause and effect relationship between the bacteria and the modulation of the behavioural and cognitive response in a healthy population. Currently, there is a lack of reliable animal and human models and consensus on defined and accepted clinical study end-points. Therefore, the legal perspective of psychobiotics, even though tightly linked to probiotics, might be more complex given the existing data and models.

For psychobiotics and other neuromodulators to be registered in the EU, clinical studies would need to overcome the current limitations to avoid deviances that might lead the authorities to reject the applications. Firstly, it would be necessary to establish a solid correlation between the ingestion of the psychobiotic and the increase or production of neuroactive substances. Secondly, those neuroactive substances should have a well-established relation between its presence and the cognitive response (e.g. improvement of mood, reduction of depressive-related thoughts, etc.). Building a strong association between the concentration of those compounds and improvements in psychological performance is crucial to generate solid and robust scientific data.

Theoretically, there would be two options for achieving an authorisation claim for psychobiotics: proving its role in maintaining a normal psychological function or demonstrating improvement above the normal baselines. For the latter, the applicant should prove that concentrations above the normal physiological range have further beneficial effects. Otherwise, the neuromodulation action can only be associated with the deficiency of a nutrient or substance if it causes neurological pathologies. It is important to highlight that even though EFSA published a guidance document covering the scientific requirements for health claims related to the nervous system, which covers claims related to depression, mood and brain function (EFSA 2012) it does not clearly state the data requirements/study endpoints that they would accept or expect to see for applicants wishing to make such claims. To date, more than 50 health claims have been submitted for various products, including probiotics that claim to support mood, contribute emotional wellbeing, maintain active memory, help relaxation, or reduce mental and emotional stress, to name but a few, but so far, no claims have been authorised because the scientific evidence provided did not allow EFSA to conclude, and the claimed effect of the food was not sufficiently defined to be able to substantiate the claim.

It should be noted that Regulation (EC) No 1924/2008 strictly prohibits associating a food or food ingredient with the treatment of a disease. Nevertheless, linking it to the maintenance of normal physiological functions is possible under the mentioned Regulation. For example, biotin or vitamin B7 was granted the health claim “Biotin contributes to normal psychological function” in 2010 (EFSA 2010). This vitamin is involved in numerous metabolic pathways and the physiological effects of its deficiency have been extensively reported by the medical community. Therefore, despite not knowing the exact role of biotin in the nervous system, concentrations below normal range were linked to the development of different pathologies and abnormalities causing depression, confusion, lower mental performance and seizures, among others. Hence, the EFSA Panel considered that there was a well-founded relation between normal biotin levels and mental performance. Based on this vitamin precedent, it is reasonable to assume that if the consumption of a psychobiotic can be unequivocally linked to the synthesis of a compound whose deficiency is known to cause nervous pathologies, then there would be enough evidence to demonstrate its positive effect on mental performance. A comprehensive literature review should provide enough evidence to establish the relationship between the nutrient and the mental disease, and medical case records can be extremely valuable resources. Nevertheless, this is a rather complex scenario as the substance exerting the effect is not the microorganism itself, but the chemical produced by it. This way, according to the current legal framework, the neuroactive substance would be the one obtaining the authorisation and the psychobiotics would be pushed to the background, reduced to a nutrient “source”. A different outcome would only be possible under a more flexible and adapted European legislation.

Can animal studies become a cornerstone for psychobiotics?

Moreover, there is also an additional limitation in relation to scientific studies. EFSA would only accept in vivo animal studies as supporting evidence complementing studies in humans when the claimed effect is not based on the essentiality of nutrients. Therefore, when psychobiotics are not linked to the synthesis of essential nutrients, animal studies would not be considered to sufficiently characterise the claimed effects in humans. However, it might be worth analysing what a hypothetical scenario would look like if in vivo animal studies were to be accepted by EFSA. It should be noted that these studies should be based on sufficiently characterised and accepted models that allow extrapolation to humans. Currently, there is no scientific consensus on how to objectively demonstrate behavioural beneficial effects in animal clinical trials. Furthermore, the lack of reliable behavioural animal models is one of the most challenging tasks that psychobiotics (and neuromodulating substances) are facing. Depression, and other mental illnesses cannot be efficiently modelled right now due to poor understanding – even in humans – of the pathology and physiological mechanisms of such diseases. Besides, animals do not manifest similar responses to humans – not to mention the variety of symptoms amongst human patients – making the comparison and extrapolation of animal models even more challenging (Yan et al. 2010). Moreover, turning behavioural observations into measurable and objective parameters is one of the boundaries science has not yet overcome. Hence, the lack of reliable animal models in the psychiatric field is unsurprising. However, it is well known that external factors, such as food deprivation or physical pain, can lead animals to exhibit similar symptoms to depression. 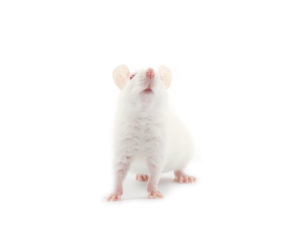 The famous American psychologist Martin Seligman already demonstrated the existence of a natural response which induces animal into a state of “helplessness” before a repeatedly hostile stimulus. In these situations, the subject shows a learned behaviour that Seligman baptised as “learned helplessness”. This phenomenon refers to a behavioural pattern which causes the animal to stop resisting or avoiding uncontrollable external adverse events (Abeilaira et al.2013). For instance, when a mouse is repeatedly given electric shocks while trying to eat food from a plate, eventually, the animal will stop reaching for it and start exhibiting this behaviour of “learned helplessness”. This will lead to weight loss, reduction of sexual behaviours and loss of sleep, which are similar symptoms that human often experience in several mental illnesses. This way, subjective observations become measurable study end-points (though of questionable reliability). However, this induced model does not mimic real conditions in which most humans experience depression-like symptoms, and also raises ethical questions regarding the use of animals in science.

In short, the use of animal models presents several restrictions which limit the viability for extrapolation to humans. Therefore, even if animal studies were accepted as substitutes of trials in humans, the psychobiotics would still have to overcome numerous obstacles to provide solid, scientific evidence before the European authorities.

In conclusion, research in the field of psychobiotics still has to overcome multiple obstacles before being recognised as products with potential benefits for mental performance. However, while the legal scenario will still be the most limiting factor, establishing a strong correlation between the psychobiotic consumption and the physiological changes might see the European authorities more inclined to accept this new type of functional ingredient. The clinical study design will be key to presenting solid, scientific evidence to the European authorities and will force a change in the legislative framework and updated guidance from EFSA would be welcomed by industry so that applicants have a clear idea of what study designs and endpoints would be accepted.