What are the hot areas?

Research into the effect of specific strains in the management of disease is growing. Over 20k research papers have been published on PubMed in the last 5 years. Gut health is not the only area of interest, as researchers are also studying effects in depression, cardiac health, liver function, allergies, migraines, weight loss, etc.

Lactobacillus rhamnosus HN001 has shown to significantly reduce depression and anxiety post-partum in a group of pregnant women (Slykerman at al., 2017). The same Lactobacillus strain has also shown to be effective at reducing eczema atopic sensitization, hayfever and other allergic diseases during the first 11 years of life (Wickens et al., 2018). Migraine sufferers that have supplemented with a multispecies probiotic for a 10-week period reported significant reduction in the frequency of chronic & episodic migraines and a significant reduction in drugs taken to alleviate symptoms of migraines (Martami et al, 2019). 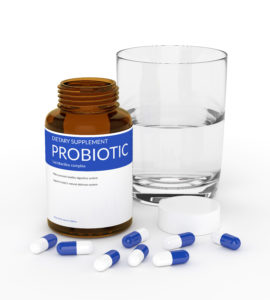 Psychobiotics is a term rising in popularity which encompasses probiotics that influence cognitive and behavioural processes. Roberto Suarez, Regulatory Affairs Associate at Pen & Tec, has explored the challenges that psychobiotics mainly face due to the to lack of scientific consensus on the mode of action and proof of cause-effect relationship of the neuromodulating effects of gut microbiota. In his article (2019), Suarez informs that although more than 50 health claims have been submitted to date for the effect of probiotics on mood, emotional wellbeing, active memory, relaxation, mental and emotional stress, none have been authorised by the European Commission on the grounds that ‘the scientific evidence did not adequately define the claimed effect’.

Why are health claims needed?

With so much research ongoing, Dr Hannah Lester, Scientific Director at Pen & Tec is of the opinion that “in the near future, we will see tailor-made probiotics based on an individual’s microbiome and genome”. Post-biotics, which are the health beneficial metabolites produced by the bacterial strains, and living therapeutics, whereby you can programme bacterial strains to perform certain functions, promise to be exciting breakthrough areas in health and nutrition. Companies such as Synlogic are already able to programme bacteria to detect inflammation in the gut and respond by producing anti-inflammatory molecules. Using this method could offer certain advantages over traditional treatments for inflammatory digestive disorders like Crohn’s disease and ulcerative colitis — it’s potentially more precise and safer than the commonly used anti-inflammatory treatments. Concomitant research of the use of probiotics in chemotherapy treatment looks promising, helping to increase the efficacy of the chemotherapy & also reduce some of the side effects.

We have only just scratched the surface of the health benefits of probiotics & their true potential is still not fully recognised.

Is a health claim possible?

Over 350 probiotic claims have been filed covering claims to support healthy gut flora, decreased digestive transit time, support of the immune system, defence against pathogens, oral health etc., and to date, the European Food Safety Authority (EFSA) has rejected them all.

A lot of money has been invested on research and great science is being generated but this is still not good enough to get a health claim. During Vitafoods in May 2019, Dr Hannah Lester shared the many reasons why EFSA has been rejecting all the health claims. These were: issues with the study design and statistical analysis; the claim was not sufficiently defined; the food was not sufficiently characterised; not enough evidence was provided to prove the claim and establish a cause & effect relationship. The song seems to have been put on repeat, but one thing is clear: there are many studies that show the positive health effects of probiotics, but the main issue is demonstrating the mode of action. 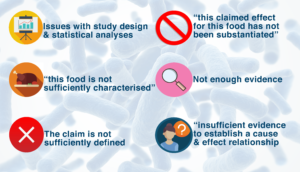 For example, let’s take EFSA’s latest evaluation of the health claim: “Nutrimune and immune claims that their products provide defence against pathogens in the gastrointestinal and upper respiratory tracts in young children”. The product under evaluation was skimmed milk fermented with a Lactobacillus. The applicant, H.J. Heinz Supply Chain Europe B.V., submitted two human intervention studies and one supportive animal study, however EFSA concluded that there were issues with the study design and that there was no evidence to support a plausible mode of action.

What options are available?

Under the ruling Regulation (EC) 1924/2006, nutrition and health claims used in labelling, presentation and advertising of foods placed on the EU market should not be false, misleading and should be substantiated by generally accepted scientific evidence. Health claims have to be evaluated by EFSA and authorised by the European Commission.

With so many failed attempts, are we likely to see a strain-specific health claim for a probiotic? Here are our top tips to increase the likelihood of success:

Unlike the European Medicines Agency (EMA) and USA FDA human pharmaceuticals, EFSA does not offer pre-application meetings with applicants to discuss study designs and endpoints. EFSA however did acknowledge that small and medium-sized businesses encounter difficulties when preparing applications and has in response decided to offer new support activities for these businesses, such as administrative support, monitoring of applications, fast processing of queries, all of which were explained in a webinar that EFSA delivered on 24th May. The video recording will be made available online soon after the event.

Are health claim loopholes actually good for the industry & the consumer?

It is not uncommon to see unauthorised claims on websites. Even if they are backed up by cited scientific studies, it is not technically permitted as the nutrition and health claim regulation covers all commercial communications, which means that claims you find online should also be substantiated and authorised by EFSA.

But…the health claim regulation does not cover non-commercial communication, e.g. public health guidelines. Therefore, the information that health care practitioners share with the wider public or their clients is not under the scope of the nutrition and health claim regulation. It is not legal to market to them directly but disseminating educational information to doctors and health care professionals is a channel that allows communication about your product and its health benefits.

Adding an ingredient that has an authorised claim, for example vitamins, minerals or fibres which “support the immune system” or “support cognitive function”, alongside your probiotic. You will be able to make the claim, based on the added ingredient and not the probiotic strain. Is this ethical? It is a practice that potentially misleads consumers, and which erodes consumer confidence.

Brand names and trademarks could also be considered health claims

From 19th January 2021, every brand name, logo, pictorial or graphic representation of a product that implies a health benefit will be banned, unless it is supported by a nutrition and health claim dossier. For example, renaming subspecies with scientific sounding names as a marketing technique i.e. ‘Bifidus regularis’ or ‘Bifidus Digestivum’.

Other solutions in getting that health claim approved is by looking at different legal pathways, such as medical devices or pharmaceuticals. 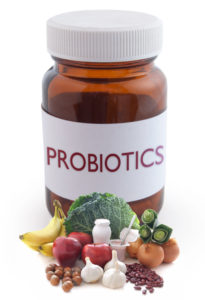 The medical device route is no longer viable as live microorganisms are no longer permitted to be used in medical devices according to the new medical device regulations adopted in 2017. Only one probiotic was approved for use in human medicine at EU level:  Symbioflor 2, a strain of E. coli which has been on the market since the 1950s. It used to be indicated for Irritable Bowel Syndrome but was later revoked by the EMA due to lack of supportive evidence and it is now marketed for general gut disorders. Getting a probiotic approved as a drug is a very long and expensive route. Also, pharmaceutical drugs have burdensome post-market pharmacovigilance requirements.

Penetrating other markets first is a better investment, North American regulations are much more lenient on claims and countries such as China, South Korea & USA have the biggest markets and high consumer demands for probiotics.

From a legal aspect, the term ‘probiotic’ already implies a health benefit and is therefore considered an unauthorised health claim. Some EU Member States don’t agree, notably Italy which allows the use of ‘probiotic’ as a descriptive term for products containing live micro-organisms, understood to support and stimulate beneficial gut microbes. Most consumers are aware that probiotics are good for the gut health, and the strategic way is informing and educating your consumers about the benefits associated with the use of individual strains.