Companies keen to do the so-far impossible – gain an EFSA approved health claim – should hold oﬀ on applications for now, and ensure new dossiers are kept simple in the future, regulatory experts told delegates at the recent IPA World Congress + Probiota 2018. 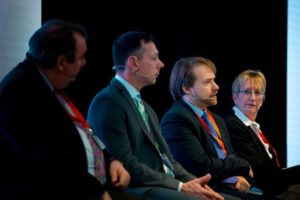 Speaking as part of a regulatory panel session at the recent congress held in Barcelona, Dr Elinor McCartney, President, Pen & Tec Consulting and Luca Bucchini, Managing Director, Hylobates Consulting agreed that while a health claim approved by the European Food Safety Agency (EFSA) has so far been unobtainable, there is hope on the horizon – so long as companies keep future dossiers simple, and learn from previous mistakes.

The pair, who spoke alongside Joshua Baisley, Director of Clinical Trials, Nutrasource and Dr Javier Morán, Professor of Food Innovation, Catholic University of Murcia noted that the current regulatory situation in Europe – where no speciﬁc health claims on probiotics have been approved and the word ‘probiotic’ itself is banned from use in marketing and on-pack –  is diﬃcult for the industry and consumers.

“But when this was decided, nobody expected that EFSA would reject everything.”​ The Italian legal expert noted that in rejecting some claims EFSA also revealed that it deemed the maintenance of the microﬂora balance to not be a health claim, and that it is not a health beneﬁt​.

“For most member states this meant that you can’t say it,”​ he said. “But in Italy there was a diﬀerent tack … a diﬀerent interpretation was that because EFSA said it is not a health claim, then it’s not regulated as a health claim.”​

Furthermore, Bucchini noted that for many years there have been accusations thrown at EFSA and the European Commission that the regulators want to ‘kill’ the probiotics industry. “People have suggested that EFSA wants to kill probiotics – I don’t think that’s true​,” he said. “Certainly EFSA, doesn’t have a political will. So it doesn’t have a political will to destroy probiotics, but also to save probiotics. That is the key issue.”​

He noted that the situation in Italy has come about because as a single country there was the political will within to ﬁnd a solution – but added that such political will is being shown in other countries in other diﬃcult areas of regulation – such as with regard to the use of insects as foods.

“Eventually, I think this will have an impact. But it is just very diﬃcult at the moment. It is just a matter of time. But not much time.”

Dr McCartney added that whilst many in the industry may be frustrated at EFSA, the European authority is widely regarded to be the toughest in the world.

“My personal opinion is that if you can convince EFSA it is a very valuable asset,” ​she said – adding that previous dossiers that have not been able to convince EFSA may have been overly ambitious.

“I suspect that one of the reasons why probiotics have failed to achieve health claims in Europe is because, in my opinion, they have been mainly attempted by marketing driven companies with certainly large budgets and enough money – but in my opinion they have been too ambitious.”​

“I would say, if you’re going to go for an EFSA probiotic claim keep it simple and go for the obvious.”​

Bucchini agreed – suggesting that it may be ‘perhaps a year or two’ before we see movement on the current deadlock situation.

“I still think that EFSA and the EFSA panellists don’t have a very clear idea of the dossier they would say yes to, and that’s the problem,”​ he said. “Once a dossier has been through EFSA and it is clear that EFSA has learned … once that has happened, then it is relatively easy.”​

“You want to be in a situation when you see an 80% or 70% approval rate so that it is predictable,”​ Bucchini noted. “But when you have something that is currently 0%, it’s very diﬃcult.”​

“But once one is out then I agree that things will move very quickly.”​