Non-conventional Alternative proteins in feed Regulations in the EU. Is it the answer to less soymeal in animal feed?

Protein is probably one of the most expensive raw materials needed in the production of animal feed and very often imported, which raises the cost of the finished feed tremendously. Proteins used in animal feeds are ranked according to the digestibility as well as their amino acid profile. Superior proteins will be easily digestible and contain all the essential amino acids needed by the animal to support all biological processes.

When the protein sources used in animal feeds are not easily digestible, an excess of nitrogen, over and above the normal amount, will be excreted by the animal which causes a negative impact on the environment as it may potentially pollute the soil and water in the surrounding areas.

It is estimated that around 34 percent of the protein in human diets originate from animal products. This amount is increasing due to the growth in the middle-class population globally, with more disposable income available to purchase animal derived proteins as a food source. A rise in demand for animal protein is coupled with larger volumes of feed production, therefore, more protein sources are needed to fulfil the needs of these animals. Consumers are becoming more aware of the sources of the food that makes up their diets, which means there is growing concern about feed safety as well as sustainability and the impact of animal rearing on the environment1. Production animals require protein in their diets for growth and overall health and wellbeing as proteins are needed for the regeneration and growth of muscles and organs. Typical diets of domestic animals can vary in the amount of protein they contain, depending on the age, type of animal as well as the physiological state of the animal. This article will give a brief overview of the classification and potential notification and/or registration processes required for different protein sources used in animal feeds.

Considered one of the most popular sources of protein used in animal feeds, especially for mono-gastric animals. It is produced as a by-product during the oil extraction process of whole soybeans. 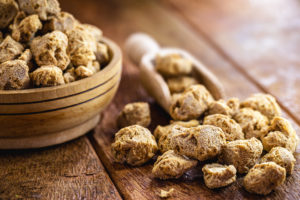 Soybean meal has long been the topic of controversy due to the impact it has on the environment in terms of deforestation in South America. Typically, not grown in large scale amounts within the EU, it would need to be imported, significantly raising the cost of the finished feed. Different protein levels can be obtained through the technology by which the soybeans are processed. According to the European Food Safety Authority (EFSA) classification, it would fall under the category of feed materials, and it would undergo a simple notification. A similar process of notification would be required for the other plant-based protein sources mentioned below.

The most common oilseed crops in Europe are sunflower and rapeseed (also known as canola), however, rapeseed contains some anti-nutritional factors and needs to be treated before being included in animal feeds as a protein source2.

Commonly used legumes are pea, chickpea, lupin, and lentils. While these raw materials are indeed excellent sources of plant protein for animal feeds, they are used in human nutrition and the production of animal feeds will thus directly compete with these raw materials. Ideally, the aim would be not to reduce the amount of plant-based protein available to the human population.

Producers of animal protein products are being scrutinised closely for their impact on the environment. Consumers are increasingly becoming aware of the effects that large scale commercial farming have on the environment. The production of plant proteins takes up many hectares of land, but these proteins are then directed towards the feeding of animals to grow more protein for human consumption. Plant proteins are also used in human diets and this ads to the already strained resources of these raw materials.

The question that producers of animal proteins often ask is: how can we ensure that the animals we grow get the best protein sources, whilst we take care of the environment as well as meet the demand for more protein by the ever-growing global population? This is of course a valid question. Below are some examples of protein sources that are considered “unconventional” or alternative to the standard, as well as the processes involved in how to get approval for these products to be included in commercial animal feeds.

Regulation (EC) 1069/20093 and Commission Regulation (EU) 142/20114 are the regulations that are used as a framework to class these specific products. Safety is the main concern when it comes to their potential uses in animal feed, and many have been restricted to use in petfood diets. All these products are monitored with traceability to mitigate the potential risks involved when using them in animal feed.

Since 2001, following the BSE scare in the UK of 1994, the EU extended the ban on the use of PAP in animal feed to all food producing animals. The ban to use PAP in ruminant feeds remains in place, so does the ban on intra-specie recycling. However, the European Commission (EC) has recently lifted the ban of including PAP in mono-gastric feeds and thus they can once again be included in poultry and pig feeds, but as mentioned above, the intra-specie-recycling ban remains in place. The lifting of this ban not only benefits the animals, as better amino acid profiles can be maintained, but it is also a sustainable approach as the feed ingredients are local which reduces the cost of the final feed remarkably and it gives feed formulators more options of proteins to include in the diet5.

The concept of insects consumed as a source of protein is by no means a new concept and countries in Africa, Asia and Latin America have long been incorporating insects in their diets, and still do. Insects are an easily digestible protein and contain an excellent amino acid profile, which makes them the ideal source of protein for use in animal feeds6. 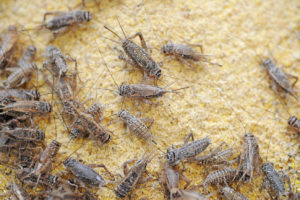 There are numerous benefits to substitute conventional protein sources with insects, one of them being that insects are able to feed on biowaste such as food waste and compost, which makes insect farming an attractive venture as it would potentially benefit the environment because of the reduction in waste. The somewhat complicated part lies in the regulations imposed on the process of farming with insects, by the EC. Currently, farmed insects are only allowed to be fed vegetal materials and in certain cases, eggs, milk, honey, rendered fat or blood from non-ruminant animals. It is prohibited to feed catering waste, manure, or slaughterhouse products.

Insects are considered animal by-products and need to be registered to use in animal feed following Regulation No 2001/999.7 Much like other PAP´s, certain restrictions are applicable on the feeding of insect protein in animal feeds. Up to date, insects can only be used in petfood, aquaculture and recently, mono-gastric diets, as explained in Table 1. There is still a ban on the use of insects in ruminant feeds.

Currently there are 8 species of insects approved for use as protein sources. These are8:

Companies who wish to produce insect proteins must register as feed business operators, which is standard practice for any company who produces feed ingredients. The same as for any other farmed animal, producers who farm insects also need to adhere to strict hygiene and animal welfare protocols as set out by the European Commission in Regulation (EC) 183/20058.

Table 1: Target species allowed raw material of insect origin in their diet within the EU8

A very promising source of protein especially for poultry and aquaculture, but more research is needed to ensure large scale farming is done in a sustainable manner. Up to date, no commercial earthworms, either whole or as meal are available for use in feeds in Europe9. Can be used in the diets of aquaculture as well as ruminant diets. These raw materials can currently only be used in limited amounts since producing the finished product is quite intensive as it involves complicated procedures of harvesting, treatment, drying, packaging, and shipping. It is of course by no means a dead end, but a lot more research and development is needed to ensure that this is an economically sound alternative to plant based proteins sources10.

These are dried products produced from single cell organisms such as bacteria, yeast, fungi, and algae and have long been a popular source of protein used in animal feeds. SCP have an excellent amino acid profile and it contains essential vitamins, which would make it a good source of protein. However, there is a high nucleic acid content present, and the digestibility is lower than that of conventional plant-based protein sources, therefore, it cannot completely replace conventional protein sources. There is a benefit to SCP production since it is produced from industrial- and agricultural waste materials such as molasses, whey, and starch. The yield will largely depend on the microorganism and the substrate used.11

The idea of replacing conventional plant-based proteins in animal feeds with alternative sources such as insects for example, looks very promising. Although non-conventional protein sources are still very much limited to mono-gastric feeds and petfood, this already alleviates the pressure of the increased demand for protein sources to use in animal diets. Alternative protein sources are attractive substitutes to conventional plant proteins as they are in many cases not influenced by the weather or climate of a country and they can be grown throughout the year. Many of the above-mentioned examples can be locally produced, reducing the carbon footprint of importing feed ingredients, as well as creating valuable job opportunities within the farming and food production industries.

One of the barriers to entry into the market would be the correct classification of and it is important that companies who wish to venture into these markets potentially seek out assistance during the application phase to avoid potential delays.