In today’s world, animal-based products are eagerly consumed all around the globe. Every year, the global meat consumption keeps increasing, which is a trend that is nowadays, to a great degree, mainly observed in developing and emerging economies. 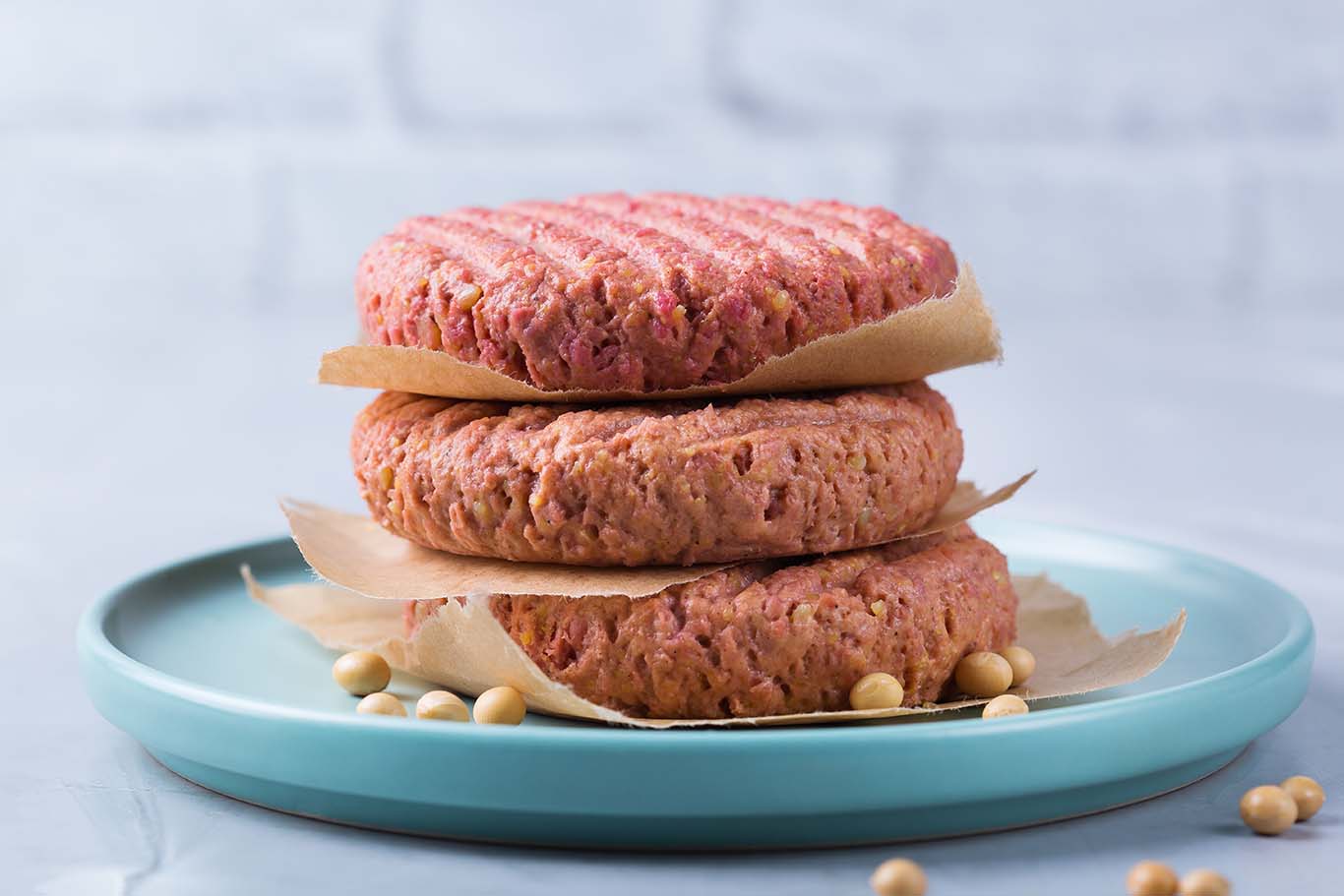 Since livestock production contributes to the emission of greenhouse gases methane and nitrous oxide, the production of animal-based products has a substantial negative impact on the environment. The required water and land resources that are linked to livestock production further contribute to the severe environmental footprints of animal protein production. Moreover, an increased long-term consumption of meat products, and in particular red meat and processed meat, can potentially lead to additional risks for human health, such as cardiovascular disease, colorectal cancer, and type 2 diabetes. In addition to the environmental and health concerns associated with animal protein production, also animal welfare issues have raised over the past years. These specific concerns have led to a growing industry and consumer interest in sustainable alternatives protein sources that can serve as an alternative in the diet to these animal protein products.

Alternative protein sources are generally understood as foods with a high protein content that can be served as an alternative to animal protein foods, such as meat, fish, dairy, and eggs. Alternative protein ranges from plant-based protein, single-cell protein and insect protein to lab-grown meat developed from cultivated animal cells. Whether alternative protein sources will become an important part of our future diet will depend on several factors such as nutrient bioavailability and digestibility, food safety, production costs, and consumer acceptance. On top of that, considering the novelty of alternative protein, several regulatory unclarities and barriers might be an extra hurdle to bring these products on the market.

Regulatory framework of Novel Foods in the European Union

Alternative proteins have the potential to fall under the legal definition of a novel food in the European Union. In EU legislation, a novel food is defined by Regulation (EU) 2015/2283 as any food that was not used for human consumption to a significant degree within the Union before 15 May 1997, irrespective of the dates of accession of Member States to the Union.

It should be noted that all products that require some degree of genetic modification fall out of the scope of Regulation (EU) 2015/2283 and are regulated by Regulation (EC) 1829/2003 on genetically modified food and feed.

All novel foods or food ingredients require a safety assessment and a pre-market authorisation before they are included in the Union list and can be sold in the EU. The application process starts with the submission of a novel food dossier to the European Commission (EC) by the applicant. The EC has 1 to 3 months after the receipt of the application to perform a validation check, in which it will check whether the application is complete. The EC makes the application available to the Member States (MSs) and requests the European Food Safety Authority (EFSA) to perform a risk assessment. EFSA will, on its turn, perform their own validation check and will evaluate the application within 9 months from the date of receipt of a valid application. EFSA will then publish their opinion on the application and forward it to the EC, the MSs and the applicant. The EC has then 7 months to publish a draft implementing act authorising the novel food. During meetings of the Standing Committee on Plants, Animals, Food & Feed (SCoPAFF), a decision will be made to adopt EFSA’s scientific opinion on the novel food.

Regulation (EU) 2015/2283 created a simplified notification procedure for traditional foods from third countries, where history of safe use for 25 years can be demonstrated. This procedure can be applicable to some macroalgae and insect species that have long history of safe use in other geographies.

Regulatory framework of Novel Foods in the United States

The United States does not have a separate regulatory process to authorise novel foods. A safety assessment of alternative protein through a Generally Recognized As Safe (GRAS) notice could be an option if toxicology and other data to support safety is available in the published literature or if documentation supporting the use in food before 1958 is available and the safety can be concluded based on the history of safe use. The GRAS notice can be notified to the FDA on a voluntary basis. The FDA has then 30 days to inform the notifier in writing when the notice was received. The FDA has a timeline of 180 days to evaluate whether the submitted notice provides a sufficient basis for a GRAS determination. This timeline can by extended by 90 days if the FDA has additional questions. FDA issues responses of “FDA has no questions”, “Notice does not provide a basis for a GRAS determination”, or “At Notifier’s request, FDA ceased to evaluate the notice.”.

Plant proteins can be used to mimic meat, seafood, and dairy products, and are often referred to as ‘plant-based meat’. If the protein from conventional plant sources is extracted in a way that may alter the nutritional content and/or novel methods are used in the production process of plant-based protein, then the final product would be considered a novel food and requires an authorisation before marketing in the EU. In the United States, plant proteins are subject to FDA’s general human and animal food regulations and would require a GRAS determination. Several food-safety risks can be associated with plant-based meat. Pathogenic bacteria can originate from the raw materials and anti-nutrients related to the plant source could be present in the product. Allergens and thermally induced carcinogens are other potential safety risks.

Single-cell protein (SCP) are alternative proteins that are produced by the cultivation of single-celled organisms. In the EU, only micro-organisms with a long history of safe use would not require a novel food authorisation. In the United States, micro-organisms are subject to FDA’s general human and animal food regulations and would require a GRAS determination. The advantage of using microbes as a protein source is the great variety of substrates that can be used to grow them, including side streams and waste from the agri-food industry, which makes them a sustainable source of protein. Moreover, several micro-organisms use substrates like CO2 or methane, providing a high efficiency for protein production. Even though making use of side streams of the agri-food industry is waste-efficient, food-safety risks are associated with this practice. Some micro-organisms might accumulate toxic contaminants such as pesticides and heavy metals present in those streams, leading to levels of those substances in the final product that might raise safety concerns. Other safety risks related to SCP are the potential presence of allergens. Mycotoxins can be present in the case the SCP is derived from fungal source.

Insect protein provides a sustainable alternative source of protein as they require less resources (such as land, water, and labour) in comparison to traditional animal protein. Their nutritional compositions are quite similar to those of the traditional animal foods. Edible insects are generally harvested from the wild, but semi-domesticated through habitat manipulation or mass-scale production in farms are other possibilities. Before Regulation (EU) 2015/2283became applicable in the EU in the beginning of 2018, some MSs have allowed insects as food and created national rules. When Regulation (EU) 2015/2283 became applicable in 2018, whole insects, insect parts, insect flour, and insect extracts became subject to that Regulation and need an authorisation according to that regulation to be marketed in the EU. If insect foods were lawfully marketed by January 1, 2018, in a MS and novel food applications or notifications were submitted by January 1, 2019, they were allowed to continue being sold. In the United States, insect products are subject to the FDA’s general human and animal food regulations. The FDA has not yet issued guidance specific to edible insects, and so far, no GRAS notices have been made for insect products. Food safety risks related to edible insects include the presence of bacteria, mycotoxins, parasites, allergens, heavy metals, and anti-nutrients.

Cell-based meat or cultured meat refers to meat developed from animal cell culture. The process to produce cultured meat involves growing the selected cell lines, or stem cells, in a bioreactor. The cells are grown in a suitable growth medium and may subsequently be assembled on a scaffold to produce products resembling meat muscle. In the EU, cultured animal tissue is considered a novel food, due to the novel production process. However, in the case specific techniques in the production process of the cultured meat are used that would be considered techniques resulting in a genetic modification in the EU, then the product would fall under the scope of Regulation (EC) 1829/2003 on genetically modified food and feed, and would be regulated as such. In the United States, FDA and USDA-FSIS have outlined a regulatory framework on how cell cultured meat is regulated. FDA oversees cell collection, cell banks, and cell growth and differentiation. The oversight is transitioned to USDA during the harvesting stage of the cell-culturing process. USDA-FSIS will further oversee the production and labelling of these products. Potential food safety risks of cultured meat are mostly related to the use of animal serum in the culture medium. The culture medium should be free of viruses and the pathogenic and infectious prion (PrPSC). PrPSC is a misfolded prion protein that is associated with transmissible spongiform encephalopathies, such as variant Creutzfeldt-Jakob disease.

Overall, we can see that there is a growing interest in alternative protein, and more and more companies are seeking regulatory approval for their innovative products. Several food safety issues and regulatory hurdles are linked to successfully introducing an alternative protein product to the US or EU market. If you are interested in learning more on this topic, we invite you to join Pen & Tec’s round table discussion on “New opportunities and challenges for novel protein authorisations” hosted by Pen & Tec’s Senior Regulatory Affairs Manager and novel food expert Ing. Justyna Pałasińska at Future Food-Tech Seminar, an event dedicated to alternative protein taking place in New York on June 21-22. The round table will be taking place on June 22 at 10.15 AM. Are you interested in bringing your alternative protein product into the EU? You might want to check our regulatory guidelines on “Regulatory approval for alternative proteins in the EU – steps to success” – its free!